The Auckland University of Technology celebrated its tenth year as a University in 2010, but is always keen to remind everyone that it has a history stretching back to the late nineteenth century when it was set up as Auckland Technical School. The institution was officially opened on 10th June 1895.

There had in fact been an Auckland Technical School as early as 1888. An advert for such a School in the Auckland Star of March that year, announced classes in Applied Mechanics and the Steam Engine taking place on Wellesley Street. The teacher was a Mr Walter I Robinson. At a prize giving ceremony it was noted that practical education was not inferior to literary education and ‘it was absolutely necessary that our youth should have the opportunity of becoming inventors and discoverers’. By 1894, clearly not having established a workload allocation policy for himself, Mr Robinson was teaching architectural drawing, construction as well as applied mechanics. Having however developed some 21st century style marketing expertise, the new advertisement noted optimistically that “First Class Honours” were available in these subjects. By now Mr Robinson, with remarkable foresight, was suggesting that a School of Design should be established in Auckland.

Mr Robinson has disappeared from the formal history of AUT which officially starts with the opening ceremony in 1895 in a new three storey School in Rutland Street (formerly Foster’s Boot Factory). Reading the Star’s report of the ceremony, the gap of 105 years between the opening of the school and the establishment of the university, doesn’t seem quite so great as you might imagine. 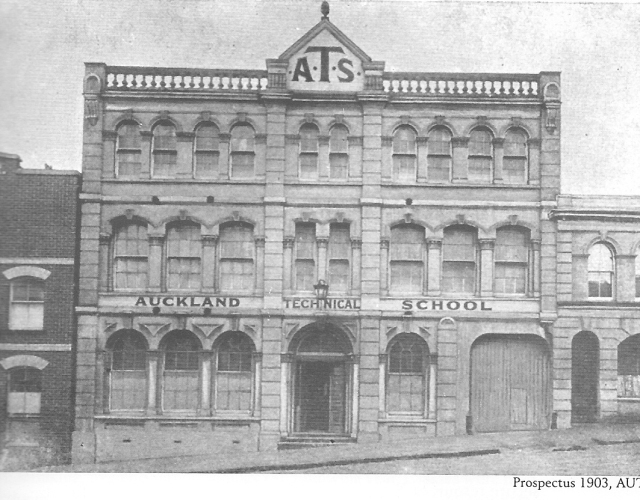 The School was formally opened by the President of the Council, Sir George Maurice O’Rorke (MP for Manukau) in front of a large gathering of were what described as influential citizens (an old fashioned term for ‘stakeholders’). 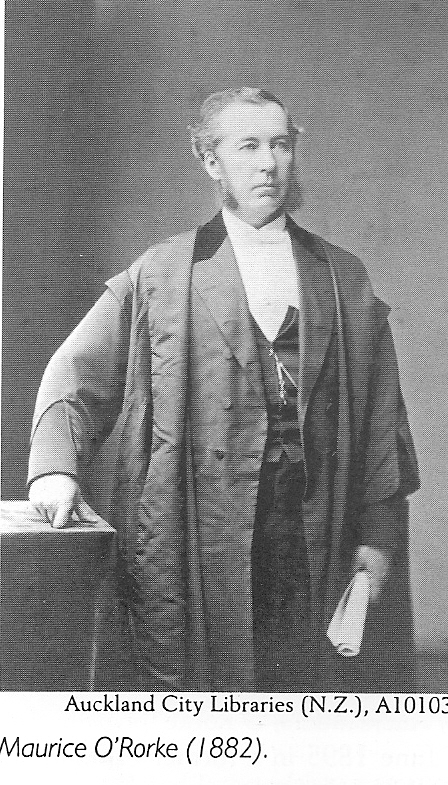 Sir Maurice (before he was knighted, he was George) noted that the opening of a Technical School had been discussed for many years, notably with Auckland University College, the Grammar School, as well as the Board of Education. The Board of Education considered that technical education might possibly be a supplement to the ‘scientific teachers and well-stocked laboratories of the University College’. The University College itself thought technical education would be good for those people who wanted to go to night school, ie the working classes. The Grammar School, while claiming to want to assist the cause, ‘entertained a delicacy lest the new School should encroach on the proper functions of academic education’.

The establishment of the School was based on a public subscription (what we would now call sponsorship) and had raised $120 which was supplemented pound for pound by the Government. A humble beginning  commented the Star, contrasting this money with the much bigger amounts spent on technical education overseas.

Sir Maurice went on to explain the meaning of technical education. There was, he asserted, no antagonism between technical education and general education. Indeed, he would go one step further and say that if students did not acquire some technical education, their progress in life would be impeded at every turn. Referring to his audience, he noted that ‘they were men who brought their practical knowledge to bear on the subject and lifted the subject out of the hand of theorists and breathed the breath of life into it.’

He did think there could be strong links with the University College with students from the school being able to go to the university to ‘reap the advantages of an academic education that was imparted by gentlemen: the professors of physics, chemistry, electricity, botany, geology, agriculture and astronomy’.

Showing a distinct lack of understanding of branding, mission or strategic development, he concluded that ‘I entertain no hope that the school is going to strike out any new path for itself, or that it was to become a shining light in the firmament of technical education though, as with many after him, he did advise all those connected to the school to look to America, Europe and Australia for inspiration.

A few weeks earlier there had been the first general meeting of the subscribers of the Auckland Technical School Association with the Mayor presiding, in effect AUT’s first Strategic Retreat. After a great deal of time discussing the purposes of the school, a constitution was adopted in what was called a ‘slightly’ amended form to that originally proposed. The amendment was ‘to confine the object of the institution to provide technical education merely and eliminate from the syllabus all those subjects included under the term ‘general education’. A reminder for us all that apparently minor events, slight amendments  – and, particularly, long meetings – can change history.

The late 19th century was, of course, a very different context, However, for those who believe that the changing world is restricted to the 21st century, the 1895 advert for the Technical School appeared next to another advert which noticed the great success of the wondrous new invention, the typewriter, which had caused a ‘revolution’ among business men ‘who are no longer the slaves of the pen’. Sedately reminiscent of the hyperbole around the iPad, the Auckland Star had commented 20 years earlier that: ‘In this age, when practically there are no bounds to the flight of inventive genius…our American cousins have accomplished great things..including the writing machine…a very ingenious apparatus…and a perfect substitute for the pen…meeting the necessity of the age’.

Looking back to that opening ceremony provides an interesting, if sometimes salutary reminder. It reminds us that we are always surrounded by the echoes of our history, not always clear and loud but part of the fabric. It reminds us that we ourselves are mostly the footnotes of the next century. That isn’t a cause for existential angst. It is how history works. Without the millions of footnotes, the heroes (and villains) would get nowhere. And finally the world was changing just as much a century ago, and undoubtedly the century before that. But while there have been huge changes both to the School/University and the society in which it is embedded over the last century, there are always some things which change slowly, if at all.